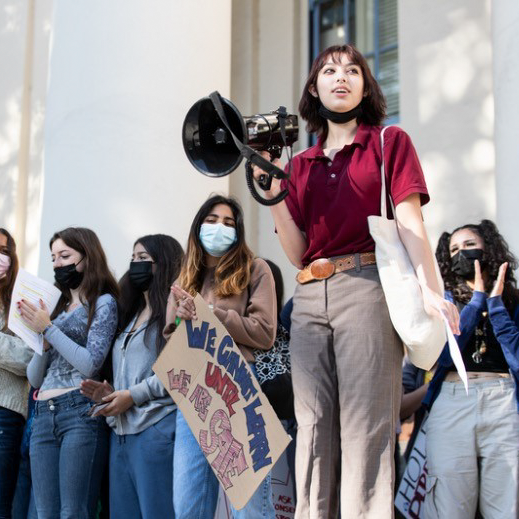 Cat calls, groping, teasing, and unwanted advances are a regular part of the school day for many girls at Oakland Technical High School, where a culture of permissiveness and passiveness had left many victims feeling unempowered – until last week when students demanded a safe learning environment by walking out of class and marching to district offices, two miles away.

“It’s very common for girls in class to have guys make inappropriate comments about their appearance and clothing,” said Leah Marquez, who helped lead the march, which left the school’s campus on Wednesday during the fourth period. “Guys can make very rude sexual comments and some teachers just look the other way, like they don’t want to get involved. No one knows what to do or where to go.”

Students provided the district a list of demands, which were read aloud on a megaphone at the district offices. The demands included an accessible means of reporting acts of sexual harassment and assault. “It was very empowering being involved in this,” said Leah. “We’ve all tolerated this kind of behavior in the past, it’s commonplace, but its still wrong.” Leah joined other students, in making signs and organizing the march. She soon found herself at the front, directing marchers down mid-day Broadway through traffic. “Community is important. We all learned the power of speaking up, and taking action.”

Demands also included abolition of the dress code. “The dress code mostly targets young women,” said Leah. “It’s not unusual for a student to get called out in class, in front of everyone, because of what they are wearing, often in a way that sexualizes their appearance in front of classmates.”

“In the past, complaints about sexual harassment would go nowhere. It didn’t seem like anyone would get punished. The district has responded to our demands, we don’t know if things will change though,” said Leah, who is a senior at Oak Tech, applying to universities throughout the country. She has been a First Church member for most of her life.